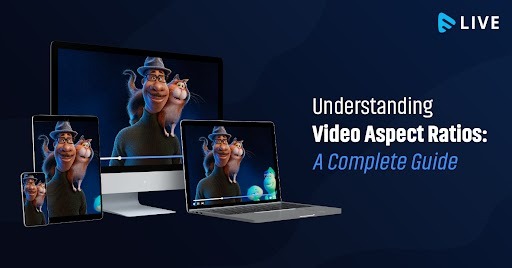 Based on your video type, category, purpose, target platforms and devices, you should come up with the best possible aspect ratio for your videos. For any VOD streaming business, as well as when it comes to stream videos to reach out to your target audience, it is important to maintain the right video aspect ratio to offer optimum streaming experience to your audience.

But how to choose the right aspect ratio? Or, from where to start? In this blog, we will guide you through all that.

What Is Video Aspect Ratio?

Let’s know a bit more about the different types of aspect ratios, what they mean and their usage.

Let’s have a look at the different video aspect ratios for your knowledge.

For decades, the usual aspect ratio was 1.37:1, commonly known as the academic ratio. With the development of over-the-top (OTT) channels, different VOD platforms, and the commercialization of television sets, a wider range of aspect ratios became available.

The 2.39:1 aspect ratio, sometimes known as anamorphic widescreen, is best for photographing landscape views. This aspect ratio is also frequent in current films, such as feature films.

Years ago, the most popular and often used aspect ratio among filmmakers was 4:3. It is, nevertheless, better suited to standard definition televisions than widescreen HDTVs.

This is undoubtedly one of the most often used aspect ratios, whether for filming for television or for streaming web media. 16:9 is a popular aspect ratio among video content creators since it is the typical size for most computer monitors and high definition widescreen TVs.

This aspect ratio is somewhat wider than 16:9 and defines the standard widescreen format. While this is a frequent aspect ratio for films, it is also used for numerous television series and multimedia content that requires a theatrical look.

How to Choose the Right Aspect Ratio

The aspect ratio influences the atmosphere, composition, and overall impact of your video material on the audience. Here are a few pointers to help you determine your aspect ratio:

There are also unique aspect ratios that work better for different social networking platforms. And you should be aware of this before you stream or share your video material on these platforms.

Understanding video aspect ratios is one of the fundamentals to master before creating video content and streaming it across several devices. You should choose a video aspect ratio based on the sort of video, the intended audience, and the platforms on which it will be shared afterwards.

Even when live streaming, bear in mind where it will be viewed the most; for example, different aspect ratios work well for different social media platforms. Having a good understanding of video aspect ratio will benefit you in the long term, especially if you’re in the streaming business.

To learn more, sign up for a 14-day free trial today.