With a breathtaking industry, eye for detail, and a newly minted freshness, Durer is classified as one of the most intellectual artists of the Northern Renaissance. Characteristics of open-mindedness and responsiveness defined his remarkable personality.

Durer was more like a bridge between the Northern and the Southern Alps and was greatly influenced by Italian art and, at the same time, created a profound impact on Italian art. Famous as a painter and printmaker known for his techniques of engravings and woodcut art, Durer is a big name in German Renaissance Art.

The painter Albrecht Durer life story is interesting when one seeks to understand his first contact with art. He was introduced to goldsmithing by his father at a very early age, where he got acquainted with tools of the craft of goldsmiths like graver and burin. Moreover, his father taught him printmaking and drawing skills, laying the foundations of his artistic career.

Durer’s father had his training under the masters in the Netherland, which later became a destination to enhance his artistic skills of Durer. Durer made his first contact with art through his father’s influence. Durer was able to grasp the new skills well and soon created his first Self-Portrait using a silver point. This artwork not only reflects Durer’s ability for precision but also signifies his acknowledgment of realism.

After being introduced to art under the influence of his father, Durer continued to expand his skills by receiving pieces of training from great artists. In other words, you can understand all about Albrecht Durer and his career from when he was an apprentice to Michael Wolgemut, who taught him woodcut art. And thus, it was under Wolgemut that Durer produced his first woodcuts, which were simple graphics with coherent shadings.

It was Durer’s luck that, along with Wolgemut, he was also supported by a successful publisher Anton Koberger who presented Durer with an opportunity related to writing and printmaking.

As Durer progressed further, much of his work that reflected the illusionism of Wolgemut began to turn into his unique style. Nevertheless, his creation shows his underlying inspiration from Northern artists. Later, Durer’s addition of religious works shows his interest in the Renaissance. This was later developed as he began to travel the world.

The impact of travel on Durer’s artistic career

With his skills, training, and luck, Albrecht Durer began to refine his skills. Durer’s ability to display still life through a combination of daily life and religion shows his mastery of skills obtained via traveling the cultural capitals around the globe.

Albrecht Durer, the painter, is said to have completed two journeys to Italy. The first visit in 1494 marked the start of the Renaissance in the Northern areas. This was more of a chance to implement the concepts of sculptural and spatial techniques pertinent to classical art. As he returned, he created his first altarpiece, Madonna in Dresden. This was created on a canvas, a technique more popular in Northern Italy and less in Nuremberg. 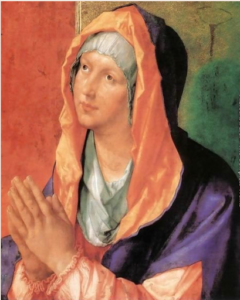 Durer’s first visit to Italy helped him gain knowledge about the classical art style. After this visit, Durer expanded his work and set his workshop, giving more time to theoretical studies. Despite mastering the Italian Renaissance Art, Durer was now looking into human proportions in line with classical theories. He also expressed a keen interest in architecture and worked on polishing his woodcut perspective. Nevertheless, his delicate, soft cuts continued to show his inspiration for Renaissance art.

Till his second visit to Italy, Durer had established a name in woodcutting art and copper engravings. In addition, he had established his unique art style, as seen through the description of Albrecht Durer’s drawings that had blossomed under the light of Italian art. His second visit let him buy the secrets of the beautiful works from the Venetian artists he hoped to bring back to his hometown, Nuremberg. However, his greatest strength lay in printmaking as he revolutionized painting concerning themes, technicality, and the methods used for demonstration.

As he renewed his contract with the artists of Italy, he started to show serious interest in art theory, specifically in human proportion and mathematical topics. This was also when he was working on Melencolia I, a work representing Durer’s vast array of interests. Albrecht Durer’s drawings continued to showcase his polished artistic style and unique techniques. This is reflected through his artworks that are described below.

Durer’s early attempt to showcase gender nudes where the figures are examples of classical sculptures. The animals used in the image, ox, cat, elk, and the hare, symbolize the Fall of Man and the resulting human soul. Durer uses his concept of proportion when creating this engraving that goes hand in hand with the ideals of the Christian religion. 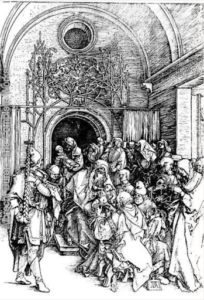 You can see architectural woodcuts in the Circumcision (1504) creation, which communicates a gloomy chamber. On the one hand, it communicates the Gothic sense of style and, on the other, reveals classical architecture. The scene is created at eye level inviting the viewer to experience a personalized stature. At the same time, the elaborate, delicate cuts reflect the Renaissance interest of the artist.

Known for having an eye for precision, Durer was a fantastic German Renaissance artist who gained fame in the 15th and 16th centuries. Starting in the goldsmithing service under his father, Durer progressed to adorn an artistic style that broke past the dogmatic German style of printmaking.

His visit to several countries polished his art style. After his second visit to Italy, he perfected his composition in painting and printmaking by implementing the Northern and the Italian Renaissance styles of Art. He was truly an innovative, humanistic artist whose work reigns classical and Renaissance art.