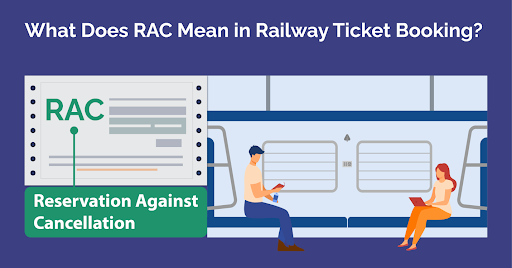 Indian Railways is the most preferred mode of transport in India. Daily, Millions of people book tickets for it, and the railways can’t confirm all of them. The train has its own capacity. So, to inform travellers whether their ticket has confirmed status or not. There is a term in Indian railways called PNR status, and RAC is one of its types.

To know PNR Status, you must navigate PNR(Passenger Name Record) number in your booked train ticket. It is a 10-digit number that the railway issues during booking tickets. The number will be on the top right corner if you have bought your ticket from the railway ticket booking centre or at the upper centre if you have booked it online.

After finding the PNR number, enter it on the rail inquiry app. RailMitra is an AI-enabled rail app that allows rail passengers to check PNR status and let them know about their travel ticket status, including confirmed, waiting list or RAC.

RAC and Other PNR Status Type

When you check your PNR number through railway apps, you might see different PNR acronyms about your ticket status. These are:

CNF – When you see this on the train ticket status, it means your ticket is confirmed, and Railways has allotted you a full berth.

RAC – With this ticket status, you get a partially confirmed ticket, which means you will need to share your seat with others.

CN- It appears when you cancel your train ticket.

NOSB- NO Seat Berth is allotted to the kids below 11 years old, which means travel is allowed with a guardian, but a particular berth is not issued.

How is RAC Different From Other PNR Status?

RAC; Reservation Against Cancellation is different from other PNR status types because in this ticket status, passengers neither receive a full berth for travelling nor it has a status in which the passenger can not travel. Here are some key reasons which make RAC status an exclusive ticket booking status.

How Much Preference Does RAC Ticket Status Get During Confirmation?

A RAC ticket holds a high chance of confirmation, and the ticket is partially confirmed. During chart preparation, you may get a confirmed ticket if some confirmed ticket holder cancels the ticket. In a running train, you can even get a confirmed ticket by asking the train ticket examiner to allot you a berth if there is any vacant seat. However, Emergency Quota (EQ)Tickets are given preference over RAC tickets. The Emergency Quota tickets are those quotas under which VIPs and railway staff book their tickets and somehow do not get confirmed. These EQ tickets get preference over regular RAC bookings.

Can RAC Status Go Into Waiting List Instead of Confirmation?

RAC status is the ticket that is above the waiting list status. So, it generally doesn’t go back to the waitlisted status. However, If a mishap occurs, some railway coach faces technical issues. In that case, confirmed ticket people will be allotted the RAC seats, and RAC status will be converted to WL status. It happens rarely.

Problem You Might Face With RAC Ticket in Train

It is correct that RAC status is better than waiting list tickets. You are allowed to travel, order food on train and use the facility of the railway system. However, it doesn’t guarantee you a comfortable journey.

The general problem you might face with the RAC ticket :

What Do When You Need to Travel with RAC Status?

However, if the chances are low or medium to get confirmed ticket status, consider carrying a pillow and bedsheet, and of course, when you contact TTE on the train, try to approach them to provide you with a full seat.

RailMitra is one of the best apps to check train schedule, PNR status, Live Train Running Status, seat availability in different trains, train fare, and order food on the train. It is a user-friendly app that aids passengers in planning a hassle-free rail journey.