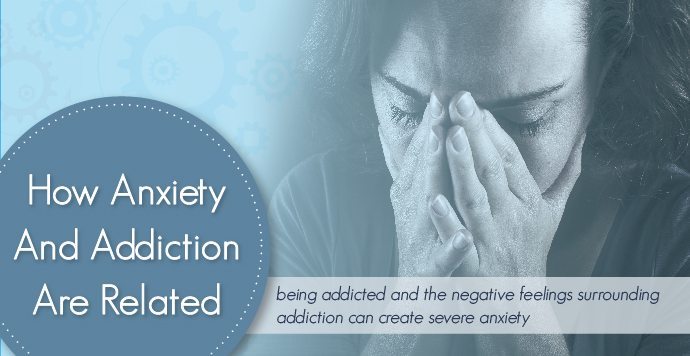 Anxiety disorders are extremely common and are noted as being one of the most prevalent mental illnesses in the United States. We all experience moments of anxiety from time to time; it’s a completely natural and normal response to stress or potential danger. Feeling worried is a healthy emotion – maybe it’s about a job interview, paying a bill, or making an important decision. However, people living with an anxiety disorder are often overwhelmed with a persistent feeling of fear or worry, which is why Neurofeedback Zürich can be so helpful.

In an effort to deal with their anxiety, many people turn to substance abuse as a temporary fix to try and soothe their uncomfortable symptoms, but this can eventually lead to dependence and addiction to the substances. The relationship between anxiety and addiction is multifaceted. With the two disorders often co-existing, it’s important to understand the relationship between the two.

The American Psychological Association (APA) says that anxiety is “an emotion characterized by feelings of tension, worried thoughts and physical changes like increased blood pressure.” Anxiety can affect anyone from all walks of life; in fact, 40 million people in the US are affected by mental disorders.

These feelings of anxiety alter a person’s emotions and behavior and cause them to believe that things are worse than they actually are. This can seriously affect how a person interacts on a day-to-day basis. However, with such a large proportion of society suffering from anxiety, successful treatment options are available in abundance and many people with anxiety are able to live happy and fulfilling lives.

No two experiences of anxiety are the same and therefore symptoms of anxiety differ in everyone. It’s important to know that whatever form of anxiety you have, effective treatment is available.

Mental symptoms of anxiety include:

Some physical symptoms of anxiety are, but not limited to:

While it is normal to experience some of these symptoms in our daily lives, those with an anxiety disorder will experience them on an intense and irrational level that interferes with their daily routines. For example, overwhelming feelings of anxiety can cause a person to avoid any social situations that they believe will trigger or worsen their symptoms.

Living with the mental and physical symptoms of anxiety is exhausting and can cause an individual to quickly turn to substances as a temporary relief. Research has found that around 20% of Americans who have been diagnosed with an anxiety disorder also have a substance use disorder.

Unfortunately, the abuse of alcohol or drugs can heighten the symptoms of anxiety and often creates a vicious cycle that can be hard to break.

It’s easy to have a drink to take the edge off excessive worrying or feeling irritable. Being unable to sleep at night is extremely frustrating and excessively popping prescription medications, such as Xanax, in order to sleep is a quick solution. Similarly, anxiety can cause an individual to feel exhausted with the inability to concentrate, resulting in people taking energy-producing stimulants, such as cocaine or Adderall; all are in vast contrast to the overwhelming anxiety that is usually experienced.

However, these feelings are temporary, and when the substance wears off, the feelings of anxiety quickly return. The National Institute on Drug Abuse suggests that people with anxiety are twice as likely to have a substance abuse disorder compared to the rest of the general population.

The Other Way Around?

As we have discussed, the relationship between anxiety and addiction is complicated. For some, addiction can cause anxiety. Anxiety is a common side effect of prolonged substance abuse. A study found that depression and anxiety were the most common side effects that were reported by people who were seeking treatment for a substance abuse disorder.

Additionally, anxiety is a common and noted symptom of withdrawal from both drugs and alcohol. Prolonged abuse of any substance can alter neurotransmitters within the brain and in turn, change the way that it works, often affecting the brain’s reward system. This leaves an individual at a higher risk of experiencing a mental health disorder, such as anxiety.

Many individuals actually have a dual diagnosis which can make it difficult to determine which came first. A dual diagnosis is a scientific term used to describe the existence of a substance abuse disorder as well as a mental health disorder. Research carried out in 2019 found that 9.5 million people were diagnosed with co-occurring disorders and only 742,000 of these received treatments for both of their diagnoses.

However, because substance abuse and anxiety are closely interlinked, with each one affecting the other, it’s almost impossible to treat one without dealing with the other. With studies suggesting that anxiety can often increase the risk of individuals experiencing a relapse, receiving treatment for both is incredibly important.

The relationship between anxiety and addiction is closely interlinked. Similar life experiences can cause both and both involve chemical imbalances and processes within the brain. For example, low amounts of serotonin in the brain have been associated with both a mental illness and substance abuse disorder.

When faced with a dual diagnosis, it can be daunting and may leave you feeling like there is no hope. But, there is a range of effective treatment options that are available for a dual diagnosis. Treatment for co-occurring substance abuse disorders and anxiety may include:

If you believe you are experiencing symptoms of anxiety alongside a substance abuse disorder, then it is important that you find the right treatment for you. An individualized treatment plan that incorporates treatment for both disorders is the most effective strategy in reducing symptoms and reducing the risk of a relapse.For more details click on Cognitive behavioral therapy (CBT)